The audiobook of Salamander, my second novel, is out.

I am  hosting a virtual version every Saturday  of the meetups I used to hold in my house for SSC readers.

I now have audiobooks,  recorded by me, available from Amazon: The Machinery of Freedom, Hidden Order, Future Imperfect, Law's Order,  Legal Systems Very Different from Ours and Harald (my first novel).

My Books
My Webbed Talks and Interviews
My Courses
Recordings of Courses
Products I Would Like to See
Story Ideas
The Option: A Story
Places I Cannot Go: A Poem
Me
My Response to a Non-Libertarian faq
Living Paper: An Open Source Project to produce computer programs that teach economic ideas.
Old Drafts
Evidence of a successful breeding program
Report from a Sample Size of One: Some Medical Observations
Miscellaneous
A Virtual Bardic Circle with some of my storytelling 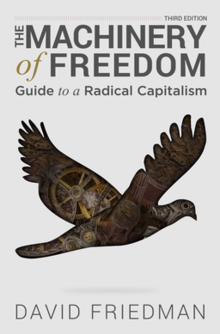 The third edition of my first book, The Machinery of Freedom: Guide to a Radical Capitalism is now webbed as a pdf.   It is available on Amazon as a paperback, kindle and audiobook. A review and followup by my favorite blogger.
The poems — in Russian

I am  working on transforming fifteen years of blogs into one or more books. The current draft, the first few sections of one book, is webbed for comments.

Another   recent project is a collection of short works of literature that contain economic ideas. The draft is up for comments as a web page. 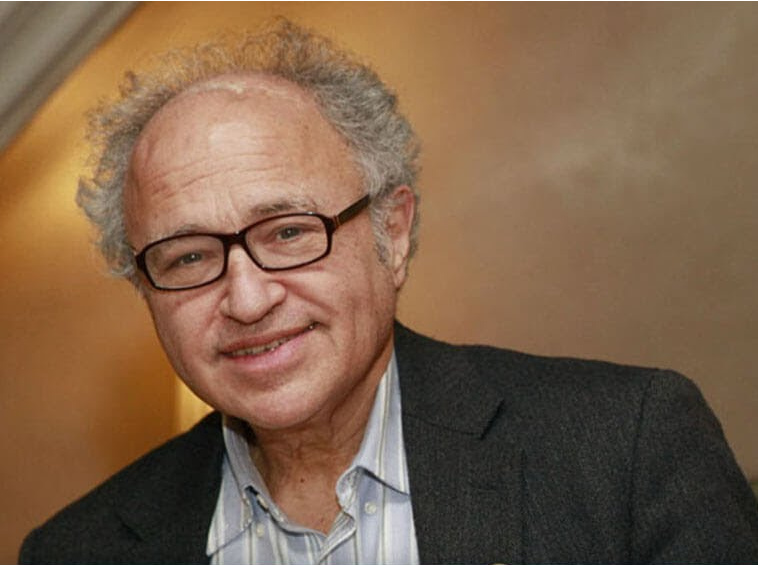 My first novel, published by Baen, is historical fiction set in an invented historical background (or, if you prefer, fantasy without magic). It has a web page showing the lovely map created for me by Chris Porter. The book is available as an eBook and in hardcopy, and I have webbed podcasts of the entire book, read by me. There is also an audiobook available from Audible.com. Baen  has a webbed interview with me.

My second novel, Salamander, this time a fantasy with magic, and its sequel, Brothers, are up on Amazon as both print and kindle, and Salamander is available as an audiobook. (The map of the college where parts of both books are set.)

Legal Systems Very Different from Ours , written by me but with one chapter each contributed by Peter Leeson and David Skarbek, discusses thirteen different legal systems, ranging from Imperial China and Periclean Athens to modern Amish and Romani. It is available in print, as a kindle, and as an audiobook. A late draft is webbed, including the footnotes omitted from the audio.

Law's Order: What Economics Has to Do with Law and Why It Matters, published by Princeton University Press, is accompanied by a book web page which contains images of the entire book along with an extensive system of links — think of them as virtual footnotes — to additional material. An earlier draft is also webbed, in a somewhat more readable form but without the links. You can read both for free. It is available on Amazon as print, kindle, and audiobook. Someone has webbed a Ukrainian translation of the introduction.

Hidden Order: The Economics of Everyday Life, is available on Amazon as print, kindle, and audiobook, read by me, and there are also German and Japanese translations. The audiobook is accompanied by a pdf showing figures, which don't work in an audiobook, and equations, which are hard to follow. There is a webbed video of my appearance on Book Notes discussing the book.

Future Imperfect: Technology and Freedom in an Uncertain World,  has a late draft webbed that you can read for free. It is available in print, kindle and audiobook.

All of one earlier book of mine, Price Theory: An Intermediate Text, is also available on the web, including the two chapters of the first edition that were left out of the second edition. An improved version is available on Amazon both in print and as a kindle.

All of the second edition of my first book, The Machinery of Freedom: Guide to a Radical Capitalism, is now webbed, both as a pdf and as a MobiPocket e-book file. The third edition, with about a hundred pages of new material, is available on Amazon in print, kindle, and as an audiobook.  The Russian translation of the third edition is available in print, as an ebook, kindle, or Free pdf.

Quote of the Month

(some of my months are very long)

“He ... gave me a memorandum prepared for him on that subject by a certain John von Neumann. I had never before heard of this von Neumann fellow, but the memorandum was obviously pretty smart for a man who apparently knew little about statistics”

(W. Allen Wallis from his history  of the statistical research group in WWII) Previous Quotes

The Market for Students
The future of stateless societies
Market failure and arguments for and against government
Feud as Law Enforcement, Ancient and Modern or Why is There a Patent Troll Problem and How Can it be Solved?
Why We are Getting Smarter: A Conjectural Explanation
A conjectural explanation for concealed ovulation in humans.

I am recently retired from teaching at Santa Clara University in the Law School. My final semester I taught Economic Analysis of Law, and a seminar on Legal Systems Very Different From Ours. The web pages for both courses have links to video recordings of the classes and other relevant material. The pages for older courses, Legal Issues of the Twenty-first century, Intellectual Property Theory, and Analytic Methods for Lawyers, have audio recordings of the classes and related material.
Spring quarter of 2020 I taught an adult education class at SCU on my Legal Systems book. 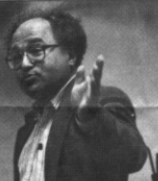 My wife says that when someone points a camera at me I look as if was facing a firing squad. I am not sure if this (from at talk I gave at Texas Christian University entitled "In Defense of Anarchy") is an improvement.
If you prefer color, this one was taken on a visit to Iceland some years back, and this was taken, and webbed, by Declan McCullagh.

In October of 1997, I had a televised debate on encryption regulation with Ed Meese. The transcript is now webbed.

I can be reached at DDFr@DavidDFriedman.com

Detailed information on usage of this site.